Like Another Epic Saga We All Know, It All Started With A Cheerleader 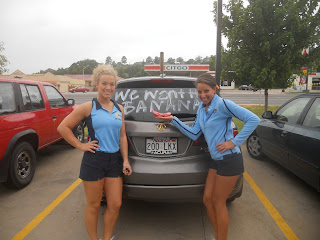 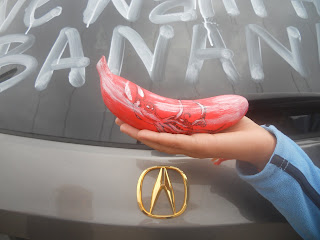 It has been a while since I have posted on here and I intend to change that. Some personal health issues have prevented me from getting the ball rolling like I would have liked, but now I am back in the game!

So, the first art banana has made it's way out into the world and the story is an awesome one! That day I had no intention of releasing any bananas into the community, but when a car pulled into the parking lot of the Starbuck's I was haunting that said. "We want the banana!" on the rear window in giant letters, I realized that that moment was destined to be the first public art banana experience. Here is the story as told by the the recipient of the banana herself:

"A few weeks ago, I walked into Starbuck's and was greeted by a friendly face and a red, painted banana. I was convinced that this woman was part of an ongoing practical joke that had started by a cheerleading squad that was attending a camp where I was instructing. Anyone who has ever been to one of these cheer camps knows that there is a big blow up banana (a.k.a. "the banana") that is given to the most spirited squad at the end of each day. Needless to say, "the banana" is a much sought after award that compels many squads to get creative with their attempts to take it home for a night. As you can see in the picture, this particular squad found my car and wrote "WE WANT THE BANANA!" on the back window. Oddly enough, Ms. Aquaheart just so happened to have started her "art bananas" movement that day and if my memory serves me correct, I was the first or one of the first to receive one of the art bananas. Due to the humid air and our fear of being late to camp, the other instructor and I just so happened to drive to a Starbuck's that was within walking distance, which resulted in our receiving the art banana. I still carry the banana with me in my cheer bag and end up telling the story to everyone who sees it. For me, my art banana is not just a piece of painted fruit, but it is an artsy reminder that everything really does happen for a reason and you never know what's going to happen next! And yes, just like I got my banana from Ms. Aquaheart, that squad got "the banana" to take home as well! :) "

This account was written by Yasmeen Abdelaal, a student and the University of Arkansas. Thanks so much to Yasmeen and her friend for being the start of the Art Banana movement!
Posted by Lynn Aquaheart at 6:08 AM